Libby Farr began her training in Texas, and then continued her education at Ballet West in Colorado and the School of American Ballet in New York. She performed in several companies including San Diego Ballet, Los Angeles Ballet, Dallas Ballet, in America, and then Zurich Ballet and Deutsche Oper Berlin. Afterwards, she continued dancing in projects such as Tanz Theater Skoronel, and at the same time teaching in several schools in Berlin while directing the Dance department at Die Etage, Berlin. She became training director and dancer at Deutsches Nationaltheater Weimar in 1999 to 2001, and thereafter was ballet mistress and assistant to Amanda Miller’s Ballet Pretty Ugly in Freiburg and Cologne. She has been a regular guest teacher in P.A.R.T.S in Belgium and SEAD in Austria since 2000, and taught companies throughout Europe such as Rosas, Pina Bausch, Cullberg Ballet, Ballet Preljocaj and others. She is also a certified Gyrokinesis teacher.

The ballet class evaluates and re-evaluates the dancer’s body with a focus on strengthening the dancer’s awareness of their own natural alignment and experience. The class is divided into two parts: the barre and the centre work. Exercises at the barre emphasise isolating and releasing the joints in order to strengthen the dancer’s core awareness and to find were the movement initiates in the body to support functional alignment. The centre work challenges the dancer to use the new found alignment when shifting weight and carrying the body through space when executing vocabulary. Motivation, flow of movement, and momentum are key points to help the dancer to move from the core and inner muscles to support a greater freedom of dynamic and expression. 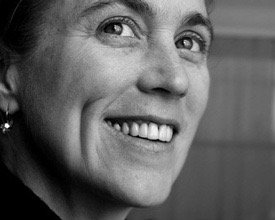