The interest of this class is to find new perspectives in how we think the body and the movement.

The first part of the class is a guided improvisational warm-up, where we tune the body by integrating breath, gravity, textures, supports, speed changes and coordination in order to create a dialogue between action and the awareness of the spontaneous movement.

In the second part we will embodied, explore and develop different movement-tasks or ideas articulating them in time and space challenging the way we phrase movements as stimulating our choices and creativity.

The third part focuses on the practice of composition in a group form, using all the previously worked elements in a playful and precise way.

Being directors and performers at the meantime.

Born in Buenos Aires, Argentina, is a dancer, choreographer, and teacher, who has been engaged in intensive work in Europe and worldwide. She was member of the Contemporary Ballet Teatro General San Martin, and since 2003 of Sasha Waltz & Guests Company.

She has simultaneously developed her own choreographic work including:

Also she has collaborated with musicians in the Frame Performance Series ‘Taktstelle- Musiktanzreihe’ ,‘Zwischenwelt festival for music and dance improvisation’ ‘Dialogue/Wirbel Improvisation’.

She has also collaborated with various theater directors including Luciano Suardi Alejandro Tantanian and Ola Mafalaani.

She has received a grant from Fundacion Antorchas, Argentina and she was supported by Senatskanzlei – Kulturelle Angelegenheiten Einzelprojekt Förderung , Dachverband Tanz Deutshcland e.V und Kulturproject Berlin in Germany. 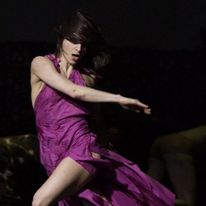