Application with a short CV via workshops@marameo.de

We are continuing with a new format that works as an incubator based on exchange, sharing and creativity.

A closed group of dancers is working together with invited choreographers/ dance makers in 3 daily changing constalletions  for one week, Monday through Friday from 14:00–17:30.

Each day will start with a 60 minute warm-up class by one of the choreographers with the entire group.
After that the group will split and each choreographer will work in in three different spaces with some dancers of the group in either solo, duo or group constellations.
Chance will decide every day about who is working with whom, we’re rolling the dice.
The last half an hour of the day will be a space for sharing and/ or feedback.

Aim, concept and idea of this week is to create a safe space for trying out and sharing choreographic ideas, work methods and new approaches.
Dancers have the chance to grow artistically by getting to know and experience different work styles and methods, focusing on the ability to quickly adapt to working with different choreographers.
In the centre of this lab stands be the aspect of sharing – work, flow, methods, trying out, creating, creativity, energy.

Financial contribution for Dancers: 110€ for the entire week
This workshop will be in English.

Lois Alexander (United States, 1991) is a choreographer, director, and dancer.
She graduated from The Juilliard School with a Bachelor of Fine Arts in Dance in 2014 and has worked with directors, Stijn Celis, Romeo Castellucci, Susanne Linke, Christoph Winkler, and Zufit Simon. She currently lives in Berlin and works as a choreographer between Germany and the Netherlands.
In 2020, she presented her first solo Neptune, which was selected by Aerowaves 2021 and toured internationally. Neptune is supported by Amsterdams Fonds voor de Kunst and is a co-production of ICK Artist Space (NL) and Sophiensäle Berlin (DE).
Through the intersection of dance, visual art and sound, Neptune creates a universe that triggers the imagination to form new modes of existence. Water with its three states – solid, liquid, gas – and transformational qualities are the points of departure to reflect on Lois’ position as a woman situated at the margins of dominant paradigms. Surrounded by melting blocks of ice, she examines the social structures that continue to affect women of color and rewrites the narrative from her own perspective. Lois has received the Young Arts Amsterdam Award in 2020 for her performance in Neptune.
In 2021, Lois made two works for the screen: Black Venus and Yeye. Black Venus is a commission from MM Praxis in the frame of Ecology of Attention and investigates the body’s potential for plurality.Yeye is a hybrid dance performance and film, supported by the Berlin Senate for Culture and Europe and is in co-production with Sophiensaele. The work explores the Afro Diasporic spirituality through the figure of the Black Madonna. The work is similarly investigating an afterlife of slavery and the reverberations on our present.Yeye had its film premiere in July 2021 in Hackesche Höfe Kino Berlin in co-operation with Sophiensäle.
n 2022, Lois is the recipient of a cultural exchange grant from the Berlin Senate for Culture and Europe and the Fonds Darstellende Kunst stipendium program Take Heart for a new collaboration with Future of Dance Company in Lagos, Nigeria. In the coming year, Lois has also been selected as a resident artist at Rote Fabrik (CH) and Djerassi (USA) to develop new works.

Lois understands choreography as a medium to work with living images to de-code and re-create them from the inside out through the materiality of the body. Her performances act as a place for pluralities of images and their meanings to converge. Her research is rooted in exploring intersectionality and focuses on interdependent modes of producing artistic expression.
Lois is inspired by what Tina Campt describes as ‘textured identities’ and uses the embodied nature of dance and performance to articulate an in-between, migratory state from black feminist perspectives.

Yotam Peled was born in Kibbutz Beit Keshet / Israel, in ‘89, and has been practicing fine arts, athletics, and Capoeira since childhood. At the age of 21, after finishing his military service, he began dancing, and later on pursued higher education in contemporary circus.
In 2015 he relocated to Berlin, and since then has been working as a freelance performer with several European choreographers, among them Maura Morales, Yann L’hereux, Troels Primdahl, Jill Crovisier and Mitia Fedotenko.
Alongside performing he has been creating his own choreographic work, which toured festivals and venues in Israel, Germany, Poland, Italy, Spain, France, Denmark, The Netherlands, Norway, North Macedonia, Luxembourg, Japan, Thailand and Vietnam, and received several awards.
As resident choreographer he worked in: ‘THINK BIG’ / TANZtheater International festival Hanover, TalentLAB#19 / Grand Theater Luxembourg, the Choreographic Center of Heidelberg, TanzLabor / ROXY Ulm, Skopje Dancer Theater, Tanzhaus Zürich, PimOff Milan.
As of 2018 he acts as choreographer and artistic director of the ensemble ‘Yotam Peled & the Free Radicals’, dedicated to the creation and distribution of contemporary interdisciplinary performance internationally. Yotam has been a guest teacher and collaborator in Fontys Academy of Arts, Folkwang University of Arts, Dock11, Munstrum Theater, Cie. Hors Surface, Cooperativa Maura Morales, Overhead Project, PRISMA festival, and numerous festivals and dance studios in Europe and Asia.

As a maker and teacher I am interested in sensitive body exploration, high physiciality, detailed choreographic work, isolation and risk taking.
My current search is in where patterns can unlock performative states, and in how we can treat the body as a material or a landscape, turning it upside down, inside out, deconstructing and dissolving. My movement language is inspired by my practices: Capoeira, Release Technique, Floorwork, Qi-Gong.
We will pass through guided improvisation, learning set material, and creating together.

Max Makowski is a German/Polish dancer from Berlin who has been dancing with Carte Blanche in Bergen, Norway since August 2020.
He discovered contemporary dance only at age 20 and started his dance studies immediately in Frankfurt am Main. In 2015 he began his career with Hofesh Shechter’s first youth company. Since 2016 until moving to Norway he mostly toured with Marco da Silva Ferreira from Portugal throughout Europe as well as joining Hofesh Shechter’s Opera for the Teatro Alla Scala in Milano in 2018. He has also worked with Joshua Monten in Switzerland and was part of Iván Pérez’ project for the Song of the Goat Theater in Wrocław, Poland.
Next to his professional career in contemporary dance Max has a passion for Argentine Tango and Flamenco and has some experience with Belly Dance.

Hector Ferrer is a Spanish/French dancer born in Barcelona. He has developed mainly his career in between Germany, France and Belgium, dancing for the last 6 years in the Ballet of Flanders under the artistic direction of Sidi Larbi Cherkaoui. During these years he has performed several works from Cherkaoui, Pina Bausch, William Forsythe, Crystal Pite, Ohad Naharin, Andonis Foniadakis among others.
Since a young age he has been interested in dance composition and improvisation, creating solos and duets for young choreographers’ evenings including the Noverre Society in Stuttgart and commissioned works for different festivals and galas in Europe. He also has a passion for digging into music and finds a strong connection between music and groove and finds his true passion for dance in this research and curiosity of discovering new or old ways of dancing and grooving.

Knowing each other through international touring we – Max and Hector – started developing ideas for a collaboration. Although never having danced together we connected through common ideas and interests and were curious about what can be created through two dancing bodies that are quite different from each other in style.
We are interested in dance forms that have been developed and contextualized in popular social places rather than institutionalized spaces. We find that formal institutions rarely invest in developing a dance culture that is formed from the popular base of society, but tend to apply an aggressive way of decontextualizing these popular dances, taking them out of their spheres, appropriating and exposing them in ways they don’t usually exist and thrive.
We would like to research movement based on principles of some of the most popular dances – as for example some urban dances, Flamenco or Argentinian Tango. Starting point of our choreografic research is that social aspect, which creates a community where each individual without having to know each other, surrenders and lets themselves be carried away by that spiral of trust through two bodies, the resonance of the music or the other couples that might share the same space. We will also experiment with transforming those principles into new forms of solo, duo, trio and larger groups.
We will always be exploring movement in connection to what music gives us, groove, the drive and emotion it evokes. In the search of movement and choreographic sequences, we propose starting points through sensations internally from the body, from elements and influences from the structure we are in and how things resonate in us. By sharing and shaping those patterns we are exchanging and embracing other ways of seeing contemporary dance, interacting and ….enjoying! 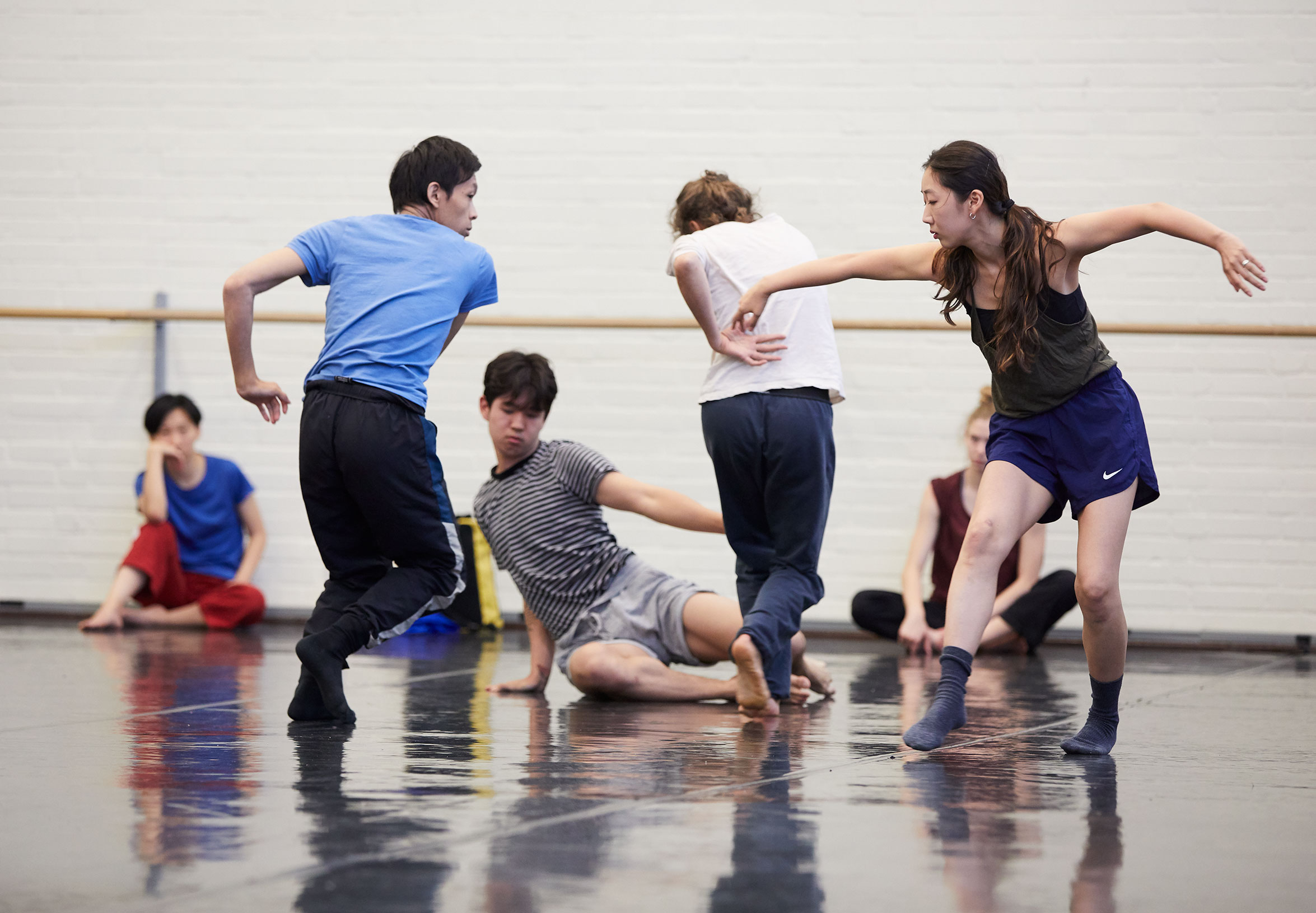