Nelody Ahlroth (she/her, b. 1989 in Finland) is a Berlin-based freelance dance artist, choreographer, movement designer and movement director. Her background is in various performance and dance practises i.e contemporary dance, theatre and hip hop and she calls her dance practise and research, both in her artistic work as well as in teaching dance, conFUSIONconcept:

“My philosophy is actually quite simple; after all, it is simply about music, movement and the bodies, connecting through those elements, regardless of a certain style or trend. We are living in the era of ‘cross-genre’ andthe inspiration we can draw from ‘The Unknown’ is endless. At times we can allow things to get a bit “blurry”, so we can perceive new.“ – Nelody

Her background in classical piano, music and theatre, in 2005 Nelody started her dance career with musicals. In 2008 she discovered hip hop and shortly after she got introduced to contemporary dance and graduated as a professional contemporary dancer in 2014. As a dancer and performer she has worked i.e in Staatstheater Nuremberg and LAVAMOVER Contemporary Dance Company, as well as done various freelancer gigs for various brands and shows (i.e Peugeot, BMW), events and dance theatre productions as a dancer and performer. In the street dance world she has a long experience in competing in various competitions, e.g Finnish Hip Hop Championships and ‘Berliner Streetdance
Meisterschaften’ (Winner 2012). As a choreographer, movement designer and movement director, she works in international productions for commercials (e.g SEAT, Opel, AOK), as well as with various musicians, music videos and short films (e.g Tora, Lostboi Lino, Mentrix) and in co-collaborations with film makers and other artists. She is the artistic director and co-author of ‘The Journey’, a dance theatre production for children by Flying Steps Academy which premiered in February 2020. For a German dance movie ‘FLY’, (release in cinemas in Autumn 2021), Nelody worked as the dance coach for the main actress (Svenja Jung) and designed an own movement language for the character together with Yaman Okur (main choreographer) as well as assisted in rehearsals and choreographic processes with the support of Flying Steps. Nelody teaches both open level classes as well as in professional dance programs. She teaches her conFUSION class weekly at the Studio29 of Sonia Bartuccelli and she is a teacher in professional dance programs such as Advanced Dance Program, Tanssille Ry (FIN) and Tanzakademie balance1. In addition to her weekly classes, she teaches conFUSIONconcept workshops across Germany as well as in other countries, such as Finland, Iran, Switzerland and Sri Lanka.

conFUSION concept
Nelody’s conFUSION concept explores connections among, between and within different dance styles and cultures, and draws inspiration from contemporary dance, hip hop and other performance practices. conFUSION concept is focused on expanding the dancers’ own movement vocabulary and their general comprehension of dance, movement and performance, both in their personal practise but as well in perceiving dance as one language.The class starts with a gentle but energising warm-up activating both the body and the mind. Guided improvisation exercises with grooves, flows and somatic movement tasks warm up the body and wake up the mind and isolation exercises work on the body awareness and mobility. Nelody uses many improvisation-based tasks when introducing a new dance technique/ principle of moving and she encourages the participants to experiment, play and dance with the given principles. When teaching her choreographies, Nelody often emphasises on the storytelling, musicality, rhythm and intention behind the movement and the dance. The use of breath and gravity allow the body to become more grounded and available for different textures and qualities of movement. In Nelody’s choreographies, the dancers have the freedom to give the movement various meanings, play and explore around somatic principles connected to different dynamics and storytelling through movement. For Nelody it is very important to create a safe learning atmosphere where all the participants can freely explore movement, dance and performance and its multiple possibilities, while having fun, exchanging and communicating through dance. 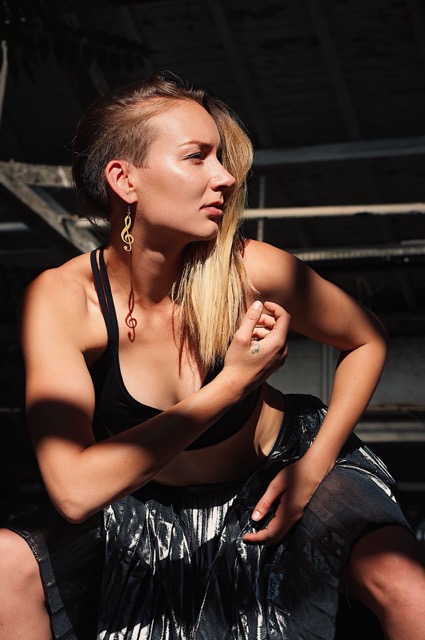